This week I had the pleasure of visiting the musée Jacquemart-André. It's my favorite art museum in Paris. There is a permanent exhibition which spans many genres and there is the curated exhibition. This time, it is of the late Gothic or early Renaissance paintings of Fra Angelico. As his name suggests, the works are truely angelic, especially when compared to other artists at this time. 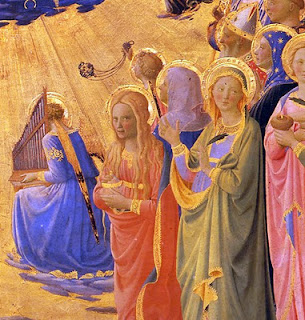 A detail from the crowning of the Virgin.
Here is a short summery of his history:
Born in 1395. From the age of 17 he was already recognised as an illuminator/illustrator of books, so he could read as well as paint. He became a friar in a Dominican order based in Tuscany. In 1436 he moved to the nearby town of Florence which was the centre of artistic activity at the time. It was here that he came under the influience of the Medici family. He had an enormous effect on the world of art in Italy at the time and died in Rome in 1455. In 1982 he was beatified by Pope John Paul II and is now recognised as the patron saint of artists.

Fra Angelico was a bookmark in history. Things changed at this time for artists and culture in general. We came out of the middle ages and science began to emerge as a wave of questioning and intellectual freedom swept Europe and a wealthy merchant class encouraged the patronage of the arts.

They did this to encourage commerce within the trading centres where they lived. Huge amounts of money were offered to artists and artisans at the time to permanently enrich cities such as Florence in order to attract other traders and their clients. Much like Paris, to this day, Florence continues to be enriched by the heritage which those merchants left behind. Today, Dubai, in the United Arab Emirates is in the process of creating a similar heritage which will enrich future generations.

What changed in art at the time of Fra Angelico was the manner and medium of representing religious images. Oil paint was migrating from Northern Europe to Italy and replacing the more labour intensive and restrictive media of egg tempera. Not only could artists work with more freedom but they could represent light, through colour, in a richer manner.

Something else happened at this time . Artists began to draw in a more realistic manner. It was, as some suggest, the use of mirrors and lens which brought this about. However, not directly because these were the closely guarded secrets of the Dutch artists and would not become known in Italy for some time.

The fact that some Dutch artists had been using these methods and Italian patrons had begun collecting their art, raised the bar, on expectations for the quality of the art, which they commissioned. Eventully the secrets of the use of lens and mirrors would arrive in Italy too.

Before that, a greater emphasis on the ability to draw and represent concepts in a beautiful and realistic manner grew out of the aspirations created by Dutch art. Scientific methods began to be used. Understanding of perspective were further developed by artists and utilized in their works. New chemistry arrived and techniques which allowed paintings to last a very long time were employed.

Fra Angelico was a master of this. His pure mind, ability to create beautiful compositions as well as his understanding of the painting media, allowed him to make a mark which still communicates to us today. His works are dramatically different to those of his fellow artists and the way he has represented people, saints and angels as well as his marvelous compositions, symbology, use of colour and gold are even now, inspiring to all artists and collectors.

The exhibition is well worth visiting and is beautifully curated, as usual, in the musée Jacquemart-Andre.

As a side note, for Irish visitors, there are three panels from the Irish, National Gallery of Art, in the Paris exhibition.
Posted by Tom J. Byrne at 6:00 am

Beautifully explained.. thank you Tom.Now I must go!

This is a wonderful opinion. The things mentioned are unanimous and needs to be appreciated by everyone.