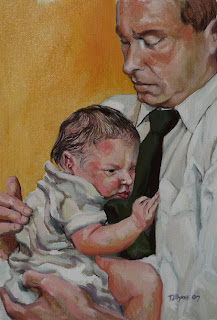 A portrait on canvas and painted in oils and tempera.

In the collection of Anne Frain.
Posted by Tom J. Byrne at 1:10 pm No comments:

Here is a controvertial point of view on the current levels of Environmental Change.

It's a reply to Al Gores film, An Inconvenient Truth.

I don't agree with a lot of what the A.C.F movie says but Al Gores film is really a political leverage campaign and as such is highly suspect.

The film linked above has a lot of very interesting information and counter balances a lot of the media promoted panic. Good to see the media reporting the issues of climate change but not good that everyone is getting so scared. I guess some people like to be scared though .^. ?

Personally I think it's time to panic and get off our asses but at the same time, if you are serious about making a change you should do it with a level head full of solid information rather than a one sided and fear based view.
Posted by Tom J. Byrne at 3:37 pm No comments:

This is the current state of the Fresco. There is one more panel to complete.

Today I move it to the right and insert the other panel on the left. When that last panel is complete everything will be transfered to the apartment wall. It should look great when it's installed. Looks pretty goood here anyway and I'll miss it when it goes but I can always visit :)
Posted by Tom J. Byrne at 8:59 am 1 comment: