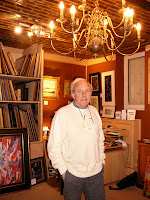 I visited Robert Peirce in his gallery in Paris this January, 2012, at 4, rue Quentin Bauchart, 75008,
beside the Arc de Triomphe.

Robert arrived in Paris, from South Africa in 1972 and worked in the french construction industry as a structural engineer, subsequently in project & general management, for 40 years. His first project was the build of the George Pompidou centre with Ove Arup, working with Rogers & Piano.

During his first professional career, he specialised in multi billion euro construction projects but at about the age of 50, began the change towards a career in the arts.

He had always been an art collector but had never consciously thought, he might one day, run his own art gallery but looking back, he recognises that it was something that was always at the back of his mind. After a period away from france, he took a year out to study art as a business. He studied the historical aspects together with technical and legal & fiscal side.

On completion of his studies a friend invited him to share the running of a gallery in Paris. He took the opportunity. He now works independently with his own gallery. The location is perfect as it is in the golden circle, beside the Arc de Triomphe.

Q. Hello Robert. Thanks for taking the time to give this interview.
Can you tell me what kind of art you deal in?

A. Initially I dealt both in contemporary and historical paintings at the same time, because I love both. However after the first five years I realised it had to be one, or the other. Not both. The audience and the means of communication are very different. So I decided to focus on historical art, simply because I had a passion for the fine details of research, philosophy, reading and the history.

Q. What do you love about being a gallerist in Paris?

A. I enjoy building my knowledge of the artists lives and works. This is a characteristic shared with many of my visitors. The exchange of knowledge with clients and other collectors is very stimulating and I enjoy educating and being educated. I've refined my ability to judge art based on experience and a knowledge of the market as a result.

I also love learning about the lives of different artists. It expands your knowledge of the the world and this profession gives me a window into that world. It feels as though I've become a part of their history. Of having become a part of their life story, which in terms of art, continues long after their death because of the people who collect their works.

I also like dealing with contextual works. That's highly stimulating. Items which have a trail of historical material connected to them. Such as the work of the 20th century artist Olivier Debré (Paris, 1920 1999). I purchased a gaouche painting with a note attached. A card in Debrés handwriting, which he had written to Bazaine, an artist and one of his friends. The painting was inspired by a design for a stage set, a ballet which was produced in 1997 by Carolyn Carlson. The card was dated 1996. The work was a particularly nice gouache on paper and the ballet starred Carolyn Carlson. I even saw it myself in a recent reproduction. So there is a huge amount of historical context, in that one image.

In terms of contemporary art, among others, I love the work of Peter Bond. A very interesting Australian artist whom I've collected over the years and whom I exceptionally exhibit in the gallery among the historical artists here.

Q. How do you choose an artist?

A. In contemporary art that's a valid question but not in historical art dealing.
So I don't. You need to have huge financial and time resources, to specialise in one or two historical artists. Plus, there are a lot of good artists out there who are worthy of attention so I don't focus on a specific circle.

However, I have specialized to a certain certain extent through two collections I have had the privilege to handle. I represent the family of Emmanuel de la Villéon (1858-1944). There are about 100 of his works in the gallery. I've sold another 100 and his family know and trust me so I see them regularly. They bring me works and I've become an expert on his art and life. I also consult for the musée de la Villéon in Fougère, Brittany.

The other collection has been lovely drawings by Maximilien Luce (1858-1941), which has made of me something of an expert in his field. Although I may really know a lot about an artist, I can't afford to obsess. A gallery is a passion but it's also a business and if you obsess you make the wrong kind of decisions.

Q. How do you price art?

A. Historical art and contemporary art are very different and it's a tricky question because you can't underprice the contemporary artists works but you also have to sell them. I base prices on per cm2 values and each artist will have a different cm2 value. Ironically, whether it is contemporary or historical art, the value of a work goes up per cm2, depending on a decrease in the size. So smaller works are worth more per cm2 than larger works. This is more true for historical artists.

There is also a pecking order between galleries. I verify prices against the value that other galleries put on the same artist. If there is a higher demand for an artists works then you can sell the works for more. Collectors set the real value when they compete for the artist, but it is a known fact that they are prepared to pay much higher prices in big galleries than in small, which is where we come in, with low cost structure and lower prices.

Setting a price is a function of 3 things. A combination of acquisition price, the market price of the artist and the quality of the work. So when someone buys a work from me, it's gone through the filtration process and I charge my markup for that service. Initially, I didn't have the courage to markup the price on works that I believed to be exceptional. Then over the years, as I developed more experience and knowledge I got better at facing the fact that certain pieces really needed to be championed.

For historical artworks there is a price based on historical performance.

This is muddied somewhat by the internet.

There are some artists whom I sell and whom I know are sold in galleries with vitrines for 50% more. That's an immediate loss to the buyer. But I accept that. It's commerce. Supply and demand. The buyer who see's a piece in a window doesn't benefit in the same way that someone who comes looking to me, does.

Q. Do you ever buy from auction houses?

A. Yes, but it takes a lot of work and there is a lot of confusion among buyers about the official prices set by auction houses. The auction houses publish the prices which art sells for 'under the hammer'.

But the buyer actually pays 30% more, for the works.

That equals the sales commission which the auction house adds to the sale price. They take that from the buyer and they also take a 15% commission, from the seller. That's almost a 50% markup.

So auction results create a false value because the works are worth at least 25% more than the values being quoted.

If someone comes to me and tries to negotiate based on auction prices I tell them that they should simply buy at auction, if they have the time and the competence, and want to take the risk. In that manner, they gain experience and understand the value of the work I do.

Buying at auction takes an enormous amount of time, knowledge and stamina. I might pick out 100 works worth buying but narrow that down to just 10 and out of that 10, get just one. I would have spent days to get that. People who come to me, benefit from that work.

Q. Do you have other sources?

A. Yes, people who know my reputation bring artworks and often ask me to represent them. To find a buyer for their collections. I prefers to work with art that hasn't been exposed on the auction market. These are virgin works. Pieces that have been in the same family or with the same collector since the artist first sold the piece.

Q. How do you market the gallery:

A. I thought initially that I would use this gallery as a base for marketing to the UK and I started doing fairs in London. I regularly did the Watercolours fair in February and Art London in October. An art fair costs about 25K. You have to sell a lot to cover that cost. It's really a marketing action for a gallery and you try to make it pay of course but if it doesn't, you have to see it as marketing. You do, directly meet a lot of people who are real collectors and future clients.

Then you have to utilize all that new information. Create databases, spend money, create newsletters, fliers. That's a huge amount of time writing and communicating. You get the idea.

After the fairs, when the English come to Paris they come to see me. I get on very well with them and they are very loyal. I also have a few American clients who regularly visit when they are in Paris.

I also attend fairs here in Paris and it's the same situation. There's a lot of work involved. I have started exhibiting in fairs in other European countries such as Brussels. but I don't network. I sell art to people who have a mutual feeling for an artists work and I find those people through art fairs and they find me.

Q. What about posters?

A. I did spend a lot of money on posting les affiches all around Paris and I still do posters but it's out of loyalty to the artists because I didn't find that they work. I also placed articles into art magazines but I had to recognise that the results were minimal. Press releases are used promote certain artists but it's not that which brings in collectors.

Now it's art fairs, the telephone and writing to collectors. It's very direct communication,, which wouldn't be possible without going out there and finding them. Things like Christmas cards help and I don't skimp on quality. The paper and printing costs are high.

Being a galerist is a bit of a vocation. It's like being an artist and this gallery is like my home so it has a somewhat relaxed ambiance. People often join me for lunch in the gallery and we discuss art and the fiscal aspect of collecting. I have a lot of credibility when discussing finance because I've managed the fiscal end of construction projects and can explain the benefits of investing in art, in terms of tax. So if we aren't discussing art, we are able to discuss business or Paris.

You can contact Robert Peirce, of Galerie Peirce
By visiting or writing to