Hello
I get emails from people about this blog but no one posts comments. I don't mind but feel free to comment.

I've been busy in a good way. It's still pretty cold for Spring but there are good days too when the sun is glorious. The birds have the right idea though. They set up a right corus in the mornings and it's good to walk through the forest when they are singing and collecting for their nests. They seem to be having a great time while doing it.

I've been working on a fresco. It's very large and is being done on sheets of canvas which will be transfered to the clients wall when complete. It will consist of marble Portor pillars with Greek caps and gold edging. The landscape is fronted by a ballustrade and a path leading into a park. The person and her dog are the client and the photo here is the underpainting in preparation for the final colours. I'm doing it in oils on canvas in my studio. 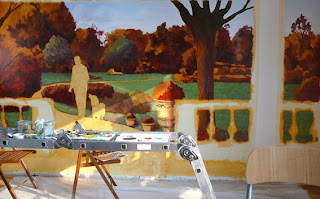 Below:
The portrait below is done in tempera on board and is in the underpainting stage here. Initially working over green grey with white tempera for the tonal values in the painting. Once dry this will receive a series of transparent oil glazes to add colour & bring life. The light passes through the glazes and reflects off the underpainting. It's a beautiful and mysterious way of working and you can concentrate on the values seperate to the colour. So you have the chance to create a much richer and harmonious painting. It takes longer of course :) C'est la vie.

I've also been doing a lot of drawings lately but don't have them scanned in. Happy with them though. Especially the very fast ones. You can create dozens or even hundreds of drawings over a period of months but it's rare to find one that will stand on it's own as a proper piece of work. This doesn't have to be particularly finished or shaded or 'worked up' in any sense. It has to have a sense of harmony and sometimes you will get a series of these all at the same time. It's rare though. I got a series of these last week which I'm pleased with.

So if you see a drawing with no real detail but which just sings to you. Don't dismiss it as not being a 'finished' or as an 'uncoloured' piece of work. It's the result of a lot of work which led up to that moment. Sometimes the result of years and years of work. All of it coming out in a moment and appearing on the paper like a piece of magic. Preserved like a butterfly pinned to a board. Don't pin butterflys to boards. Drawings are much more earth friendly.
Posted by Tom J. Byrne at 12:33 pm 1 comment:

I'm a grown adult. 40 years of age and I can proudly state that I have done my best to not damage the environment through use of a car in my life. Till yesterday. I took my first driving lesson with my wife beside me giving me directions on how the car works. It was remarkably easy and we didn't almost kill anything.

So why now? I live in the countryside outside of Paris and often have to nip into the city with work or to colect materials. Large paintings or even a series of large paintings under the arm are not a great idea on the train especially during rush hour.

Trips in the car will be rare. I still don't like cars much, or at all really. As well as that, in April we are visiting a company in Lyon who manufacture a car that runs on air. Yes! Air!

It's been in production for a while and was first shown at the Paris car show in 2002. It was a bit of a put...put...put machine back then but aparently, has improved a lot. If it hasn't we won't go near it.

It goes 200K on compressed air and after that the fuel kicks in, which is vegatable oil, diesel or petrol. Someones got to try them out!

You can be sure that if it's good I'll post more info here about it. I reckon the hydro car is going to cost a fortune initially so while that's getting over itself we'll drive this and keep things clean.

That or stick to the diesl that we have at the moment.
Posted by Tom J. Byrne at 3:06 pm No comments:

There's a lot happening at the moment. I'm working on a large painting for a client in Paris. It's very large so I have to do it on several sheets of canvas and then join them together. More on that later, when it's finished perhaps.

In the meantime I've done a nice portrait and a desert landscape.

The landscape is a wedding gift, from the bride to the groom. A nice idea. He spent some time in the desert and loved it so much that he speaks about it quiet often. This took over a week to complete. It's a large canvas. Not done from life unfortunately. 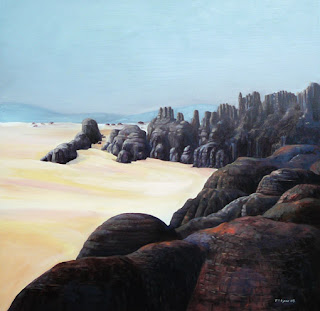 The other is a portrait of a young girl. She has a rich dark brown skin, like a chestnut just out of it's shell. It shines in the softest of sunshine. She has modeled for six hours for this portrait. It requires a little more work and I'm looking forward to finishing it.