Today is a beautiful spring day. There are small buds suddenly visible on the trees. I must start on my paintings of the change of season in the forests here. I already have several of autumn and one of winter. Appropriately with minimal colour. It is mostly drawing on canvas. Nice grey lines in charcoal.

So how do the Parisians celebrate spring. They have gone on strike :)

Only in france. It's officially to protest against the policies of Sarco. Even the radio stations have gone on strike (amazing) !!!

They couldn't have timed a strike better. This is only the third day of sunshine we have had since the darkness of winter. It's unlikely that the city will be very busy tomorrow. Most people 'prend le pont' which means that they combine a day off with a weekend. So from last night or this morning there will have been an exodus from Paris to the countriside. Bravo le grève :)
Posted by Tom J. Byrne at 10:31 am No comments:

Shell kills off the Green

Hi
I'm a greenie. I've always been and was kind of getting to the point of being lazy about it. After all. Everyone is green now. So I was feeling like, 'it's okay' I can relax a bit. After all, even the oil companies are seeing sense.

Well the fights back on!!

Shell have just announced that they are dropping all investments in alternative energy. Because it's not profitable enough. Nonsense!! Solar power technology is really coming into it's own and is increasing in efficiency at a rapid rate. The danger is more likely that alternative energies are threatening to actually replace their oil products.

In the process of their "previous efforts" to go 'green' and invest in the process' of green energy technologies, they will have filed many patents for technologies that would make the world a better place.

That's a bit sneaky really. They had the cooperation of people who really believed in what they were doing. The finest minds throwing themselves and their ideas into the pot in order to liberate the world and improve the environment. Now those technologies are bottled up. Captured, where they can't do any good.

People who would like to take up where Shell left off will be unable to, without getting badly sued. Unless they are in China that is, because China doesn't respect copyright that much.

I, for one, will be avoiding all Shell products (where possible) and purchasing alternatives.

There is only one word for this and unfortunately it's derogatory.
Posted by Tom J. Byrne at 5:56 pm No comments: 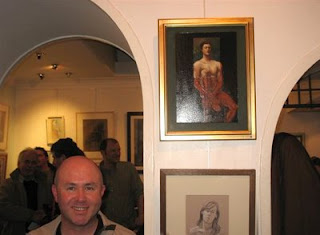 Hi
The exhibition went really well. There was a huge crowd even before it started with more arriving as the evening went on. As for atmosphere, it was great. There was a great crowd of interested buyers and a few artists that I hadn't seen for a while.

The exhibition continues until the 28th of March and I highly recommend visiting. The exhibition area itself if on the first floor and is open to the public from 5pm.

Liam has a very good Irish Arts Event blog. He manages to get himself invited to everything and graciously records them all.

Here's a pic of myself, Liam Madden & Brian Gallagher. 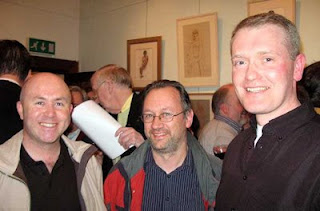