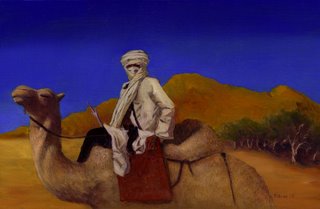 I painted this in oils for my own pleasure. It's quiet small measuring about 14 inches x 8 inches on canvas. Recently I painted some desert scenes for a client and it made me realise how beautiful the desert is and how totally different the life and light is there.
Posted by Tom J. Byrne at 12:58 am

Apartment on the rue de Seine 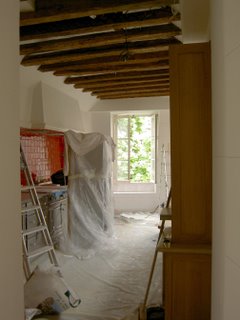 This project is in rue de Siene in the 6th of Paris and the client is Laurent Taieb the famous Parisian restauranteur. It includes the kitchen, bedroom, bathroom and reception. Lot's of gold leaf, patine and faux pierre.

I'm working with Francoise this time and we are starting with the kitchen, giving it the atmosphere of an old chateau using faux pierre (fake stone) in relief on the walls. It's kind of a double cheat as it really is an old chateau but the previous owners modernised it so this brings it back to something of it's previous state.

It's a lovely apartment and huge, taking up the second floor of a chateau which hides behind large stone walls and a massive gate in the centre of Paris.

Laurent is a nice guy and it's surprising how much respect he gives everyone that works with him. He's very chatty but forcefull. Not the shy type. The rest of the apartment is being worked on by carpenters and electricians and we come in after they move to another room. Everything is done with military precision.
Posted by Tom J. Byrne at 8:26 pm 1 comment: 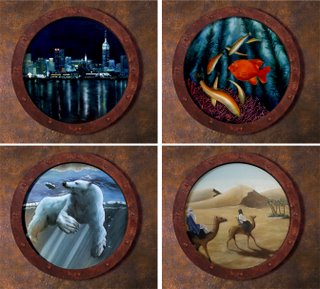 Finished the sub last week and here are some of the views through the portholes. The wall is a metalic finished patine designed to look like rust and so are the frames of the portholes which are made of wood but to see them, even close up, you would think they were rusty iron.

The paintings are done in oils. Unfortunately I didn't have good light to make decent photo's of the work but here they are anyway. The themes are at the clients request. Don't know why the desert is in there but they are happy, which makes me happy too.
Posted by Tom J. Byrne at 5:15 pm 1 comment:

It's flea market time.
Every June in Paris and around the city there are flea markets which last one day and don't come again for another year. The best has to be around Nation in the centre of Paris but the local one here in Champs sur Marne is pretty good too. Everyone who lives in the village is offered a stand where they can sell off their collections, oddments or things that they don't have the room for anymore. It's really interesting to see what people have been hoarding in their houses. Sometimes you come across a real gem.

The image on the left is the view of the local chateau where some social events take place but mostly it's a museum. Great gardens.

The middle image is of a group of neighbours sharing lunch in the front of their house while people view their stall.

On the right is a woman shading a curious buyer with her green umbrella. Her colour coordination and the light just made this a photo worth posting.

You can enlarge by clicking on the image.
Posted by Tom J. Byrne at 4:48 pm No comments: 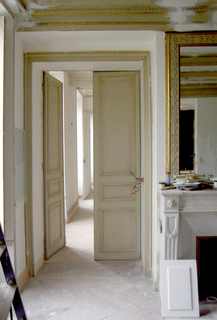