Standing in the rain.

Burrrr!!! It's winter. I was out in the forest painting yesterday. It was a little overcast but nothing serious. About an hour into painting it started to drizzle. Nothing very heavy. I ran to the house and grabed an umbrella & large sheet of plastic. The plastic was for the easel and the painting. The umbrella kept me dry while I sheltered behind a tree. An hour later, I concluded, it was time to give up pack everything away and get back to the house till it stopped.

However, the time spent waiting for the rain to stop, standing under the tree with an umbrella in the rain, was marvelous. I had a chance to just experience nature. No mobile phone, no people passing, no cars. Just the drizzle, the trees and me. I almost never stop to just experience things. There is so much to do. Even when I'm painting I've often got that little voice in my head judging the work and trying to understand what it is I'm doing so that I can build upon the experience. This was nothing like that. Just calm. Very quiet and respectful. Nothing boring about it. I really enjoyed, just looking at nature, wet and all as it was.
Posted by Tom J. Byrne at 7:40 am No comments:

Damian Hirst must think that Francis Bacon was a pretty bad painter. He and his PR company are always drawing parallels between Bacon and Hirst. It's constant.

He's throwing tons of money at this new identity of his. So what if the critics dish the work he does. He'll just build more PR and pay for more articles in magazines, do more deals with museums and art galleries. Eventually the critics will bend and their opinion of his work will go from 'it's a terrible mistake' to 'the best thing ever'.

Because once Hirst has brain washed the public, the journalists will, quivering as ever in the face of public opinion and received fact, capitulate and kiss the ground he walks upon. Or should I say water, he walks upon.

The only hope for his demise is if he himself balks at the amount of work & money involved in changing the opinion of the masses. If he finds that actually doing his own painting is too much of an emotional drain. I can easily see him falling back on his minions to create the paintings while he parties. If he hasn't already.

At least he claims he's promoting painting that is supposed to be self created rather than directed.
Posted by Tom J. Byrne at 8:43 am No comments:

Inside the brain of an artist

Have a look inside the head of another artist, literally!
Irish actor, Fiona Shaw allowed her brain to be scanned while reading T.S Elliots 'The Wasteland'. The results are remarkable.

I hope this doesn't happen to all Banksys work.

Reasons to be cheerful

Today I went to collect the frames for my December exhibition. The framer did a marvelous job and very fast too. They look great.

After that I went to an exhibition in Baillencourt sur Essonne. It's not a high quality exhibiton, just a local thing but lots of good artists come from all over france to be in it. Certainly it has some good quality work on show.

I got an invitation to a very cool exhibition in Paris on the Champs Elysses next week. Looking forward to that.

Sent off promotional material for the next exhibition in December.

Invited some other artists to show their work in Ireland with a gallery that I work with.

And now I can't sleep because I'm thinking about the show, in two weeks, so, I'm going to do the most creative ironing I can, at 3am :)
Posted by Tom J. Byrne at 2:41 am No comments:

Thank goodness for the great outdoors. I was painting with some other artists in Fountainbleau on Sunday. This is when I'm happiest. Out in nature with other artists. It's really, really great. I wish I could do this every day.

Here are a couple of photos. The painting is in acrylic. 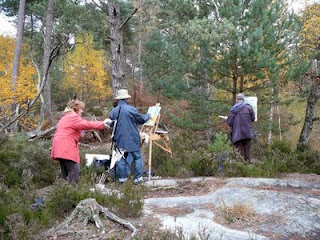 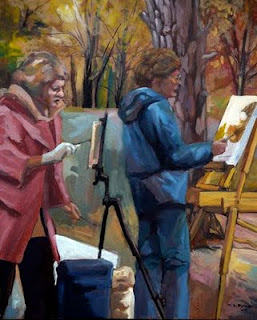