The weather has been so bad that we barely noticed the spring and most people are still shaking off the winter blues. It's hard to believe it's June.

None the less, it's summer time here again and in Paris that's when people start to meet up, socialise more, dust down their projects and collaborate.

I've joined a film crew in Paris as their storyboard artist. Among the projects that we're working on is a romantic drama about two people who meet online and eventually marry. The script is bound to change but here's a photo of the last meeting with some of the people involved. Actors, directors and crew & myself. The first draft of the first part of the storyboard is below.

Apart from that, I'm still drawing nudes of course. Below is a sketch from last Saturdays session with the live model. She's brilliant and usually creates pretty good poses but it's when she's taking breaks that she looks the most dramatic. If we weren't so busy talking among ourselves, that's when we should be drawing her. 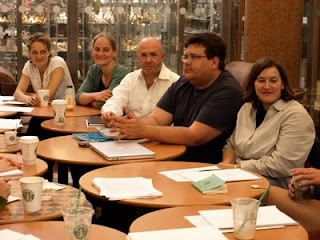 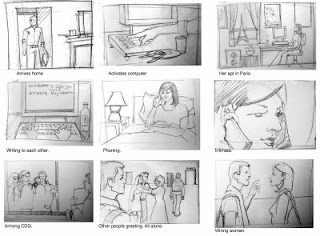